Daughter of the Forest by Juliet Marillier

Authors draw inspiration from many places and it has been said that there are only so many stories to be told. Very often the skill of the storyteller is not in the story but in how it is told. Ancient mythology is a common source of inspiration and it is from the old Celtic myths of Ireland that this New Zealand author has turned for this historical fantasy fiction. Based loosely on the legend of the Children of Lir and elements of the German fairy-tale ‘The Six Swans’ Marillier manages to conjure up the rich and mystical landscape of ancient Ireland.

Sorcha is the youngest of seven children and is raised largely by her six older brothers following the death of her mother during her birth. Her father remarries but his new wife is jealous and attacks the children. Sorcha escapes but her brothers are all turned into swans. Desperate to save them she learns that they will be freed if she weaves six shirts out of nettles without speaking a word to anyone. Retreating into the forest to complete her task she is cared for by the faerie-folk and visited twice a year by her brothers in human form. But if Sorcha thought that this seemingly impossible task was all that awaited her she was very much mistaken. 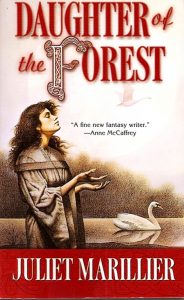 This engrossing story will completely transport you to a magical landscape, evocative of Tolkien and ancient mythology.

Noughts and Crosses by Marjorie Blackman

For today’s teenagers the mid-20th century really is history, and the attitudes of that time are alien to their lives. Young people today are exposed to such a range of cultures and people that segregation (South African apartheid or the Jewish ghettos) can seem unimaginable. Yet even a cursory glance at the news reveals that it is perilously real for some, and not just those in foreign lands.

This is why Marjorie Blackman’s award-winning teen novel is so unsettling. It tells of a divided society with two groups. The Crosses are the lucky ones: born into privilege and wealth. They run the country and have the best funded schools. But the Crosses couldn’t function without the other half – the noughts. The noughts are the bottom half of society. Their purpose is to work for Crosses and to keep the country ticking over. They are suppressed at every opportunity. This is segregation taken to the extreme: and it doesn’t work along the lines you might think it does. 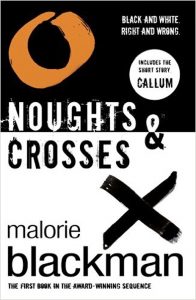 At the start of the story 13-year-old Sephy (a Cross) is secretly continuing a childhood friendship with Callum (a nought). This is a friendship that seems to be on a path to self-destruction as their feelings for each other grow. Fuelled by the growing uprising among noughts and the Liberation Militia the two teenagers are destined to be pulled apart.

Blackman presents many echoes of the past: America in the 50s, South Africa under apartheid, and even the IRA of the 70s and 80s. Add to this some inspiration from Romeo and Juliet and you have a novel that will challenge the way you view the world.