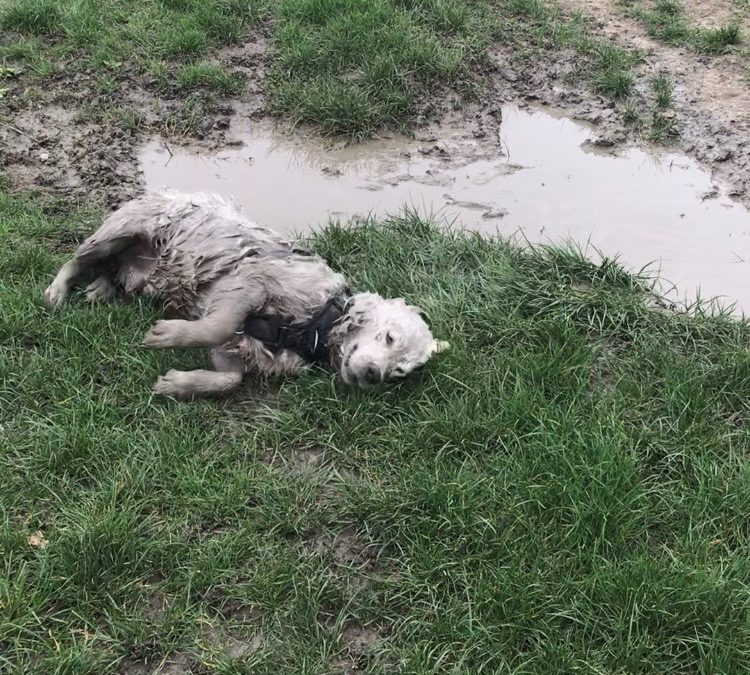 Today I decided that I was fed up and tired of being a white polar bear, and I had a plan.

Firstly, I needed food to fuel my antics, but one breakfast was simply not going to be enough. Daddy is a clueless hooman so I whined and cried in front of my food-hole they call a ‘booowl’ and he filled it up with my tasty soft pebbles, giving me an early breakfast which I made disappear. Then I did the exact same tac-tic with Mum, fooling her into thinking daddy had forgotten poor little Kenzo’s food, easy – 2 breakfasts!

The time then came for them to take me on my daily field romp, however with the wet and windy weather, my plan would work perfectly. It had created the one thing I needed, MUD!!! I pretended to be the good-est boy a hooman could ever want, jumping into the ‘caaw’ fearlessly, unlike my usual self, fooling mummy into a false sense of security. We were on our way, stage one complete.

We arrived, and the field was heaven; puddles of glorious mud 3 inches deep and grass ripped away revealing the gooey goodness I needed. I ran, speeding superbly, a missile with lock-on, straight to the dark oval swamp. “KENZOOOOO!” Mummy screamed fearfully, but it was too late! I had reached the thick, brown liquid and rolled and rolled until there was no patch left untouched. I had done it, I was now a black bear

It would be fair to say mummy was not happy, but it did not matter because my mission was accomplished. Back in the ‘caaw’ I went. We got home to the gaping jaws of my brother and sister who kept saying OMG! then they carried me AGAINST MY WILL, into a plastic hole known as a ‘barrrf’, it was sickening. They were onto me, they had it filled with water and smelly stinky soap. Before I knew it, I looked down, and to my despair, my hard work was undone. I was a white, polar bear puppy again.

Until the next adventure